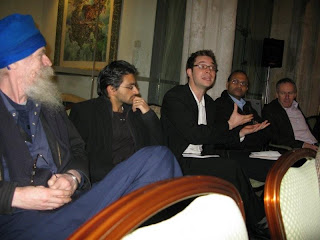 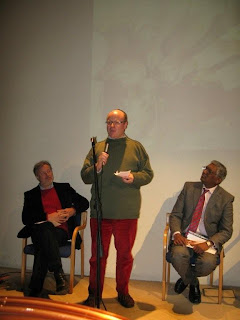 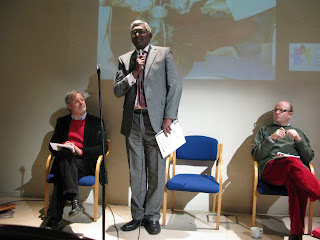 The first seminar on the new book on 'Social Cohesion - A Jain Perspective' published by Diverse Ethics was held at the St Ethelburgas Centre for Peace and Reconciliation in Central London on 3rd Dec 2008. Mr. Simon Keyes, Director of the Centre, opened the discussion by explaining how topical he felt the subject was - "it is the number one challenge in the minds of central and local government at the moment, and one where fresh ideas and solutions are really lacking. A Jain perspective on this subject is important and adds a valuable contribution to the debate." The audience came from a cross section of organisations - from PETA to Procter & Gamble, from the Jain nuns at Jain Vishwa Bharti to Global Tolerance.
Funded by the Meghraj Foundation and the Centre for Excellence in Leadership, the research was done by Dr. Aidan Rankin and Dr. Atul Shah. The book draws on Jain wisdom to show practical policies which government can implement to help build cohesion, through areas as wide ranging as environmental policy, education, health-care, business and work ethics, crime, politics and economic policy. The foreword is written by Lynne Sedgmore CBE.

The authors explained their motivations for writing the book. Dr. Aidan Rankin explained:"I was brought up in Britain in the western cultural tradition but from a young age, developed an empathy and concern for all living beings. I then came across the Jains and got inspired to research and write about this ancient wisdom and have written three books so far - 'The Jain Path', 'Social Cohesion' and a new one coming out on the subject of 'Anekant'. For Jains cohesion included unity with all living beings, not just humans." Dr Aidan Rankin described his experience of encountering Jainism from a western perspective and how he believed it could change the way we look at politics, economis and our relationship with the environment. We can benefit especially, he believes, from the Jain principle of anekant, or many-sidedness, which enables us to respect diverse viewpoints as aspects of a larger truth.""

Dr. Atul Shah explained his personal story of upbringing in Kenya where cohesion was an everyday experience, but then coming to UK, where he found himself isolated and confused. "My culture and wisdom was never mentioned or discussed at the University where I studied, yet it had such a profound vision for the future and is so relevant to the modern day." This book represented a rise in personal self-confidence about his Jain culture and the vision it can provide for a new and better Britain. It took 30 years of living and working in Britain for me to build that confidence."

In his concluding remarks, Mr. Simon Keyes who chaired the seminar noted: " I think time has come for leaders in government and different faiths to sit and just listen to the Jains as their thinking and vision is so profound and so timely for todays multiple crises. "
Posted by Dr. Atul Shah at 11:18 AM

Mr Shah, next time you do an event at St Ethelburgas- I expect an invite!

Very interesting piece. Am yet to get back to you on the book but will do when the fires cool at work.

Once you’ve found your perfect freelancer crm, most of the hard work is over. The next step is to familiarize yourself with this new business software tool, and set it up in a way that will help you accomplish important business objectives.A good CRM will help you automatically log and act on email conversations with clients and prospective clients.

Tamara Tebo said...
This comment has been removed by the author.
11:10 PM

I have been checking out a few of your stories and i can state pretty good stuff. I will definitely bookmark your blog Buy shoes Online

Thanks for this nice blog. keep blogging! Hello, guys Do you have any knowledge of online dice rolling? How does it function? And what kind of materials does it use. If you want to learn more, you can visit Roll Dice Online or Dice Roller Online, where your basic idea might become clearer.