I am just completing a very interesting course on leadership organised by the charity Common Purpose http://www.commonpurpose.org It is an experiential course, and one of its central themes is 'Leading Beyond Authority' - as the most common approach to leadership seems to be through the use of status and power, and Common Purpose would like to show other approaches which in the long run are more 'empowering'.

I come from a whole culture and community of leaders. It has very long roots, in fact 3000 years old, and it is fair to say that the Jains are not just leaders but oftentimes, leaders of leaders. We have a beautiful temple in London which is dedicated to our 24th Tirthankar (Prophet) Mahavir who was our pioneering spirit. Born as a prince in northern India in 599 BC, he was well-educated and from a young age, had a deep spiritual quest. At the age of 30, he decided to leave his home and family and go into the forest to meditate on the real science and purpose of life. A deep and intense reflection over a period of twelve years resulted in him attaining 'Kevalya Gnan' (perfect knowledge and wisdom) one day, and after that, he established the Jain Sangha and gave sermons on the science and philosophy of ahimsa (non-violence).

The connections with Common Purpose are obvious. The Jains also believe very strongly in interdependence and this philosophy is extended to all living beings (parasparopagraho jivanam). There is a strong emphasis on values and self-discipline. Every Jain is encouraged to minimise harm to any living being and live a life of simplicity and respect. The environment, animals and nature are given a very high status, where humans are trustees and fully responsible and accountable for their actions.

When such values are practiced, leadership becomes a 'natural' act. People are automatically drawn to you as there is no agenda, and one leads through example. Knowledge and learning are regarded as very important for the progress of the soul, and the combination of a scientific approach with a deep sense of ethical accountability are key ingredients for success in leadership. Even in the area of thought leadership, Jains have had a huge role in the history of India. Mahatma Gandhi, regarded as the greatest leader of the twentieth century, drew his inspiration from the Jain philosophy of ahimsa. Our latest book on 'Social Cohesion' can be seen as an example of responsible thought leadership being given to this very pressing problem in Britain.

In the guided tour of the temple on 9th Mayhttp://www.diverseethics.com/CommonPurposeTour.htm, I will explain these concepts and show how Jains replenish their leadership values and commitment through regular worship and prayer. For us, Common Purpose is a cosmic law. We are very pleased to be associated with this charity and to help them with their diversity outreach.
Posted by Dr. Atul Shah at 5:24 PM No comments:

DIVERSITY IN THE CIVIL SERVICE

The above link shows details of a programme for University students from diverse backgrounds to have a paid internship in the Civil Service. There are details of case studies of individuals who have worked and their experiences of the programme. Special training is also provided during this time, with the aim of attracting the students to permanent jobs and also to act as ambassadors for the Civil Service.

This is a positive, practical example of how the diversity mix of staff in an organisation can be altered and barriers to entry and perception broken. It is not the only solution, as often there are barriers to promotion after minorities are recruited, but it is definitely a start in the right direction.

As we have maintained with earlier blogs, the real problem in the British public sector is with senior level recruitment and retention. This is often where diversity is weakest, and there are huge cultural and ethical barriers which need to be faced and addressed before there are results. This is a particular expertise of Diverse Ethics (the social enterprise that I have founded) and we would be very happy to help organisations implement sustainable practices to embrace diversity for the medium and long term.
Posted by Dr. Atul Shah at 12:00 PM 1 comment: 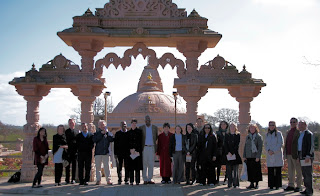 We took a group of managers from the arts, education and heritage sectors for a tour of the Jain Temple in London to help them experience an ancient Ayambil festival. Festivals are a handbrake on life - they are great opportunities to recharge and reflect. Where we have an ancient festival based on a timeless philosophy of 'respect for all life' (Ahimsa), the meaning behind the festival is very special and timely given the modern age of disrespect and mass animal cruelty.
The experience was truly uplifting for everyone who came - it enabled them to see an ancient culture from the inside, and admire its integrity and genuine spirit of hospitality and welcome. When we learn and celebrate these ancient wisdoms, we inspire and enrich modern life by really seeing how much we have to learn from difference. Prejudice or ignorance gets reduced by such experiences. Creativity is sparked from within by simply being in beautiful surroundings. Possibilities and positive thoughts emerge spontaenously.
We recommend that when we have an opportunity, we should use different cultures as a way or stretching our minds and expanding our horizons, without necessarily losing our personal identity. Culture tours are one way, but there are so many other ways. Media should not be the only source of such information - we should actively seek it out ourselves. And children should be exposed at a very early age in their life.
For more pictures and articles, visit http://www.diverseethics.com/Ayambil.htm
Posted by Dr. Atul Shah at 4:31 PM No comments:

Ordinary people are extra-ordinary. Ordinary people matter. Ordinary people is where life and its problems and challenges, are real. When Michelle Obama visited a girls school in inner city London, she remembered her 'ordinariness' and showed great courage and humility by not playing to the tune of the media or any 'middlemen' about how she spent her time here. In the process, she ignited good values about education - hard work, perseverance, even that it is 'cool to be smart'. She went on to Harvard, in spite of being raised in an ordinary Chicago family.

There are many similar stories of ethnic minority successes in Britain - perhaps not as powerful, but significant nevertheless. For most of them, success has been won through hard work, perseverance, and sheer guts and determination. Examples include the founder of New Look, poet Benjamin Zephaniah, the writer Andrea Levy, artist Shanti Panchal, actress Meera Syal, and we can go on.

As a country, Britain still fails strongly to embrace this talent for its own progress and betterment. This is because the media is still strucuturally biased, and very powerful. But we do not need the media. We should recognise and support our own success stories, and use our networks and contacts to help them go far and wide. As ethnic minorities, we need not be jealous of others in our communities, nor ashamed to help them. In their achievements and successes lies our own. This is the only way we will open channels for our young to climb the ladder of opportunity and empowerment that they so deserve.
Posted by Dr. Atul Shah at 10:55 AM 1 comment: